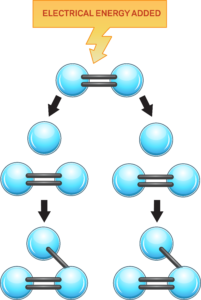 Dutch chemist, Van Marum was probably the first person to detect ozone gas censorially. In the description of his experiments, he mentioned the notion of a characteristic smell around his electrifier.
However, the discovery of ozone was only just mentioned by name decennia later, in a writing of Schönbein that dates back to 1840. This discovery was presented to the University of München. Schönbein had noticed the same characteristic smell during his experiments, that Van Marum had tried to identify earlier. He called this gas ‘ozone’, which is distracted from ozein; the Greek word for scent. Generally, the discovery of ozone is ascribed to Schönbein. Moreover, Schönbein is mentioned as the first person to research the reaction mechanisms of ozone and organic matter.

After 1840, many studies on the disinfection mechanism of ozone followed. The first ozone generator was manufactured in Berlin by Von Siemens. This manufacturer also wrote a book about ozone application in water. This caused a number of pilot projects to take place, during which the disinfection mechanism of ozone was researched. The French chemist Marius Paul Otto received a doctorate at the French University, for his essay on ozone. He was the first person to start a specialized company for the manufacture of ozone installations: ‘Compagnie des Eaux et de l’Ozone’.

The first technical-scale application of ozone took place in Oudshoorn, Netherlands, in 1893. This ozone installation was thoroughly studied by French scientists, and another unit was installed in Nice after that (in 1906). Since than, ozone was applied in Nice continuously, causing Nice to be called the ‘place of birth of ozone for drinking water treatment’. In the years prior to World War I, there was an increase in the use of ozone installations in various countries.

Around 1916, 49 ozone installations were in use throughout Europe (26 of which were located in France). However, this increase faltered soon afterwards. This was consequential to research of toxic gases, which evidently lead to the development of chlorine. This disinfectant appeared to be a suitable alternative to ozone, as it did not have the shortcomings in management, such as low application guarantee and low yield of ozone generation. Ozone production did not reach its prior level until after World War II.

Today, chlorine is still preferred over ozone for water disinfection. However, the last decennia the application of ozone applications did start to increase again. This was caused by the discovery of trihalomethanes (THM) as a harmful disinfection byproduct of chlorine disinfection, in 1973. Consequentially, scientists started looking for alternative disinfectants.
Another problem was an increase in disturbing, difficultly removable organic micropollutants in surface waters. These compounds appeared to be oxidized by ozone faster than by chlorine and chlorine compounds.

Furthermore, ozone turned out to deactivate even those microorganisms that develop resistance to disinfectants, such as Cryptosporidium.
Finally, there has been a progress in the abolishment of shortcomings in ozone management.

Ozone is a molecule that consists of three negatively charged oxygen atoms. The ozone molecule is very unstable and has a short half-live, causing it to fall back into its original form after a while, according to the following reaction mechanism:

Principally, an ozone molecule is nothing but an oxygen molecule that has received an extra oxygen atom by electric high voltage. Ozone is naturally produced through certain types of chemical reactions. The most commonly known example is the ozone layer, in which ozone is produced by ultra violet rays (UV), which derive from the sun. Ozone is also formed during thunderstorms, in water falls and – allthough this is a less natural process – in photochemical smog which forms in summer. In thunderstorms, ozone forms as a result of the high volatges that are involved. The specific fresh scent after a thunderstorm is caused by ozone formation.

When one speeks of ozone, the above-mentioned examples are immediately associated with it. It is however less known that ozone can be artificially produced, so that it can be used for water treatment. Ozone generators can create ozone artificially by means of extremely high voltages or by means of UV-light. Both methods involve the decomposition of the oxygen molecule. This causes oxygen radical formation. These oxygen radicals can bind to oxygen molecules, forming ozone (O3).

Ozone is one of the strongest known oxidants. It can be used to technically burn dissolved compounds (oxidation). The extra oxygen radical in an ozone molecule quickly binds to each component that comes in contact with ozone molecules. This is because of the instability of ozone and its inclination to return to its original form (O2). Both organic and inorganic substances may be oxidized by ozone (oxidation), but also microorganisms such as viruses, bacteria and fungi (disinfection). This causes the extra oxygen radical to be released from the ozone molecule and to bind to other materials, so that only pure and stable oxygen molecules (O2) are left.

As a result of the above-metioned reaction mechanisms, ozone can be used for a large variety of purposes. Ozone is mainly applied in waste water and drinking water purification (for disinfection). The application of ozone in the industrial branche is increasing. The food industry uses ozone for disinfection and the textile industry uses ozone for color removal.
The largest benefit of zone is its pure caracter. It only oxidizes substances, and as a result byproduct formation rarely occurs.